In the stop short episode of Seinfeld, George’s mother mistakingly thinks that Kramer is trying to make a move on her. To find out more information about the mishap simply continue reading. As well as to find out why the episode’s official name is The Fusilli Jerry. 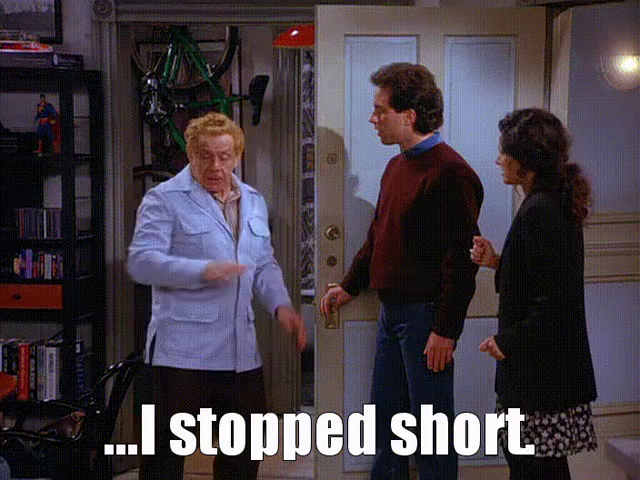 Kramer picks up George’s mother after an eye exam:

Kramer picks up George’s mother Estelle, after an appointment with an eye doctor. Estelle’s doctor tells her that she can’t cry for ten days as if she cries she could ruin her eye work. During their drive, Kramer accidentally hits a pothole and accidentally pushes one of his arms onto Estelle.

George’s mother thinks Kramer is hitting on her:

Estelle quickly misunderstands Kramer’s gesture and accuses him of using one of her husband’s moves on him, which she calls the stop short or stopping short.

When she gets home Estelle tells her husband Frank, that Kramer tried to hit on her on the way home, using his move the stop short. In a rage, Frank tries to track down Kramer who is at Jerry’s apartment. An argument breaks out between Kramer and Frank and Frank ends up falling on to the Fusilli Jerry. A state of Jerry that Kramer crafted which has been made out of uncooked pasta shells. During the fall Frank hurts his rear end.

Kramer takes Frank to the doctor:

Kramer then ends up having to take Frank to a doctor who specializes in injured rear ends. He discovers that the number plate that he received a day earlier which said assman belonged to the doctor as he has a boat which has the same name.

So if you can’t wait to see Kramer get in trouble with George’s mom and dad and for George and Kramer to get into a fight that results in a broken pasta statue of Jerry make sure to watch The Fusili Jerry!