Seinfeld is responsible for a lot of iconic phrases, one example of which is the term chucker. To find out what the phrase means and which character was referred to as a chucker in the episode The Boyfriend, simply continue reading. 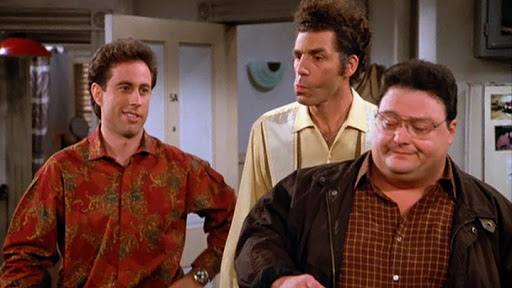 After a game of basketball Jerry and Kramer call George a chucker:

At the start of the episode, Jerry, Kramer, and George are in a gym’s locker rooms discussing the game of basketball they just played. George teases Kramer for dribbling the ball too much. However, Kramer responds that he has to dribble as if he passes the ball to George he’ll just chuck the ball. No matter how far away he is from the hoop. When George protests, Jerry backs Kramer up and tells George that he is a chucker. George is mortified that he’s played basketball with his friends for years and no one told him that he’s a chucker.

The subject is quickly changed when the trio realize that they’re all naked:

The subject quickly changes when the trio of friends realize that it’s the first time that they’ve seen each other naked.

The trio realize that they’re in the locker room with a professional baseball player:

The friends can’t believe their luck when they realize that Keith Hernandez, a famous professional baseball player is in their locker room. Jerry tells Kramer and George that he should introduce himself as he also has a following but his friends insist that being a famous comedian isn’t as impressive as being a professional basketball player. In the end, Keith comes up to Jerry and asks him for an autograph as he is a huge fan of Jerry’s comedy.

After reading about the chucker episode hopefully, you now understand what the term chucker means and whether or not you’re guilty of being a chucker.