One tense episode of Seinfeld, which will keep you seated on the edge of your chair is the infamous kybosh episode which is titled The Opera. To find out who threatens Jerry’s career and the reasoning behind their scheme, simply continue reading. 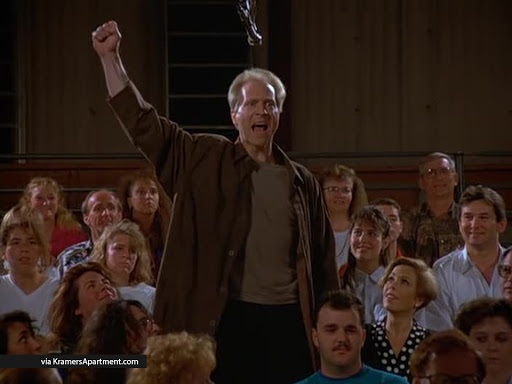 Jerry receives an intimidating call from his long-time adversary Joe Davola. Davola accuses Jerry of bad-mouthing him to the high-powered executives at NBC. He tells Jerry that Jerry was guilting of “putting the kybosh on me”, and that he was going to return the favor and was going to put the kybosh on him.

Joe Davola was wrong about Jerry:

Poor Jerry is understandably confused with Davola accuses him of turning the NBC executives against Davola. As he did no such thing and made an incorrect assumption.

Jerry worries that Davola will do something to ruin his career:

If you’ve never heard of the saying kybosh, it means to put an end to something or to stop something in its tracks. So Jerry worries that Davola will do something drastic in order to get revenge on Jerry and to derail Jerry’s career. As Davola is known for being psychotic and dangerous, Jerry panics thinking of all of the schemes which he may be planning to get his revenge.

Although audiences expected Davola to make his big move in the same episode he didn’t and the rest of the episode focuses on Jerry and his friends’ big night out at the opera. While Jerry’s career may be safe, he and his friends get into plenty of trouble at the opera.

So if you want to see Jerry panic, thinking that Davola will do something major to end Jerry’s career, it’s definitely well worth watching the kybosh episode of Seinfeld.