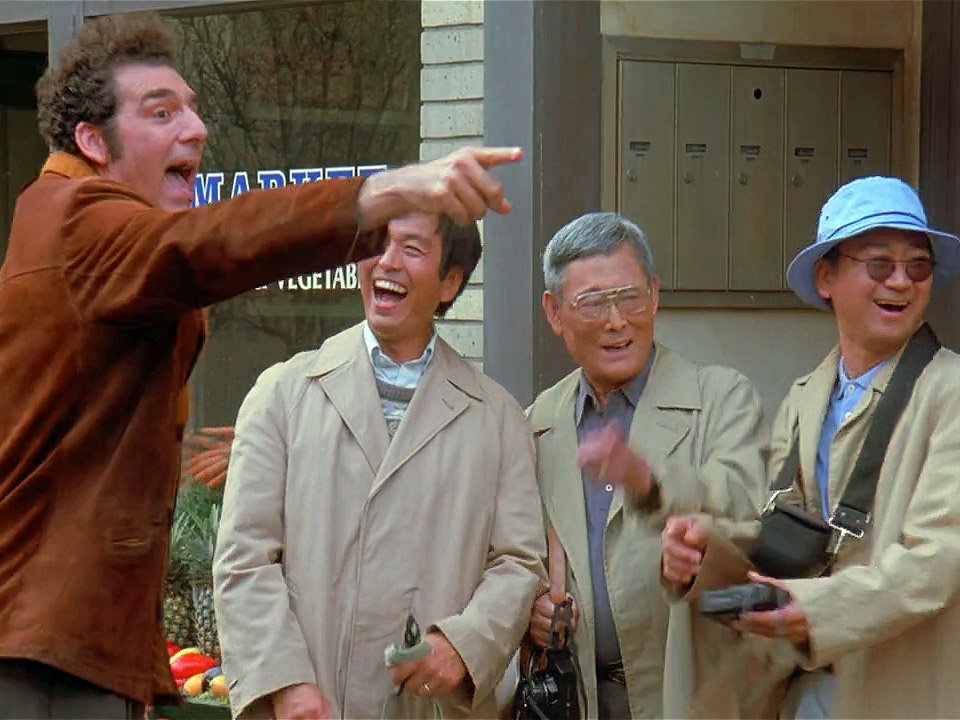 Jerry starts to receive 12 cent cheques from his stint on an episode of a Japanese TV show which was named Super Terrific Happy Hour.

Kramer decides to take a bunch of traveling Japanese businessmen on a tour of the city:

Kramer runs into a group of traveling Japanese businessmen who he spontaneously decides to take on a tour of the city. Unfortunately, Kramer converts Japanese yen into US dollars incorrectly and spends all of the men’s money on overpriced clothes and souvenirs. As the men don’t have enough money left to stay at a hotel, Kramer decides to host the men in his apartment.

Kramer tells Jerry and George to pitch their TV pilot to the businessmen:

Jerry refuses to pay $200 for an umbrella:

Jerry is caught in the rain but refuses to pay $200 for an umbrella from his nemesis Teddy Padillac. Padillac tried to charge Jerry an exorbitant amount of money as he believed that Jerry previously tried to steal one of his ideas.

Elaine’s boyfriend is convinced that Jerry is poor:

Due to the fact that Jerry carries around 12 cent cheques and couldn’t afford a simple umbrella, Elaine’s boyfriend mistakenly believes that Jerry is dirt poor.

So if you want to see Kramer try to host a bunch of Japanese businessmen and Elaine’s boyfriend mistaking Jerry for a poor man, make sure to watch The Checks.