In the episode Festivus George comes up with the idea of using a fake charity, to impress his co-workers and to save himself money. To discover the details of George’s plan as well as whether or not it was successful simply continue reading. 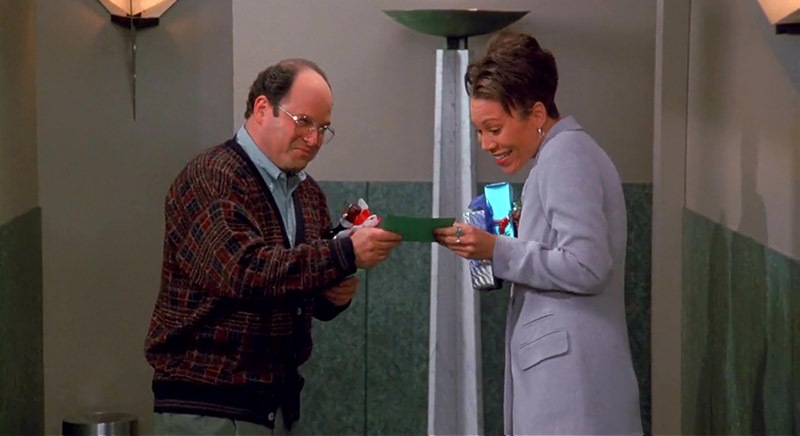 George gets his cheeky idea from a friend:

When George discovers that his friend Tim Whatley successful gets out of spending money on his friends gifts by giving them cards which state that Tim made a donation to a charity, on their behalf, George plans to try the scheme out for himself.

As George is too stingy to spend money on his colleagues’ Christmas presents, he gifts them with cards which state that he has made a donation to The Human Fund in their names. Each card features the slogan “money for the people”.

George’s boss gives him a large cheque to donate to The Human Fund:

George is surprised when his boss gives him a cheque for $20,000, which is made out to his fake charity, The Human Fund. However, George doesn’t get away with his scam as his boss’ accountant tells him that The Human Fund doesn’t exist. George tries to get out of trouble by telling his boss that he doesn’t celebrate Christmas because his family celebrate Festivus. An obscure holiday festival that parodies Christmas traditions. To convince his boss that Festivus is not made up, he invites his boss to a Festivus party which his friends.

So while it’s hilarious watching George try to get out of purchasing Christmas presents for his colleagues, he definitely doesn’t get away with making up his own fake charity. In the end he realizes that it would’ve been easier, to purchase Christmas presents than to take his boss to his family’s Festivus celebration. If you haven’t watched it, make sure to watch The Human Fund Seinfeld.